INTERACTIVE PROJECT “THE WORDS I NEED”

INTERACTIVE PROJECT “THE WORDS I NEED” 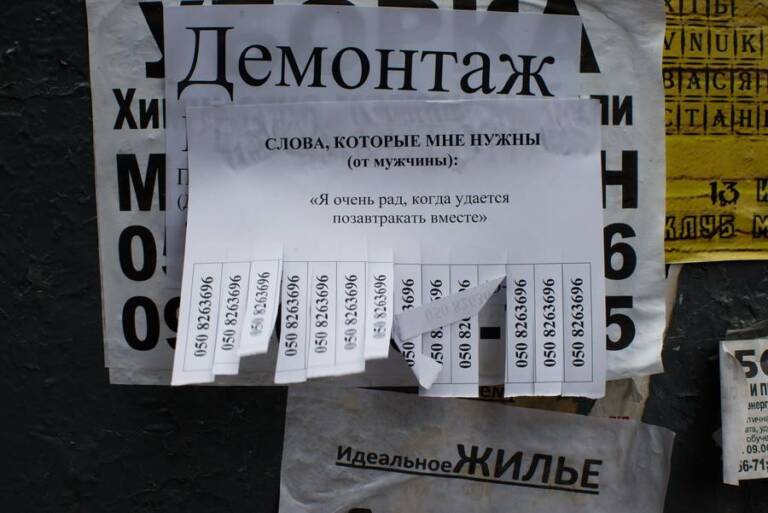 “The Words I Need.” Ani Zur

What is the project about:

Experiencing a crisis in my relationship with a partner, I reflected on a person’s need for words that express love, approval, understanding, trust, support and care, and how these words influence a relationship. By contradiction, I carefully wrote down in a notebook my partner’s words which I did not want to hear. In their stead I formulated the words I was in need of and made paper notices with them, pasting them around town. To the odd passers-by who called me, I proposed to say on camera the words from the posted notices, and thus create a psychological counterbalance to the reality in which I was living. I listened to strangers who were trying to save me. Their words were false, but the sincerity with which they spoke made me rethink what intimacy and understanding meant.

In the first part of the project, 800 ads were posted and 55 calls were received. 26 men gave their consent to meet and record the video, 12 of them took part in the filming.

The second part of the project was to study the partner’s needs and the ability to say the words he or she needs. When I pasted ads in the city, I received phone calls from men and messages about what they wanted to hear from their women (or men of the same sex relationships). Finally, I recorded a video in which I pronounced all those phrases myself. Other people’s words became my own as I spoke, and this caused an unexpected inner reaction. Acceptance, love, harmony, humility, pain, anger, fear, alienation. The video, which was considered an illustration of the sociological cross-section, became a living performance, resulting in a conflict between the impossibility of acting and the necessity of being honest. Thus, the project created a new perspective to see. Should we strive for a “positive” image of ourselves, should we support, accept, hear our partner — or should we remain ourselves, and therefore sometimes ignore or criticize them, express our dissatisfaction?

During the second part of the project, 500 ads were posted, 80 calls were received, and 52 men agreed to say the words or phrases they needed from a woman (a man in a same-sex relationship).

The exhibition will present the chronology of the project (video, objects, photos, sound). Visitors will also be invited to write on the wall the words they want or do not want to hear from their partner, which will create a real “picture of needs.”

There will also be a happening at the opening, during which the artist will be telling her loved ones what she wants to hear from them.