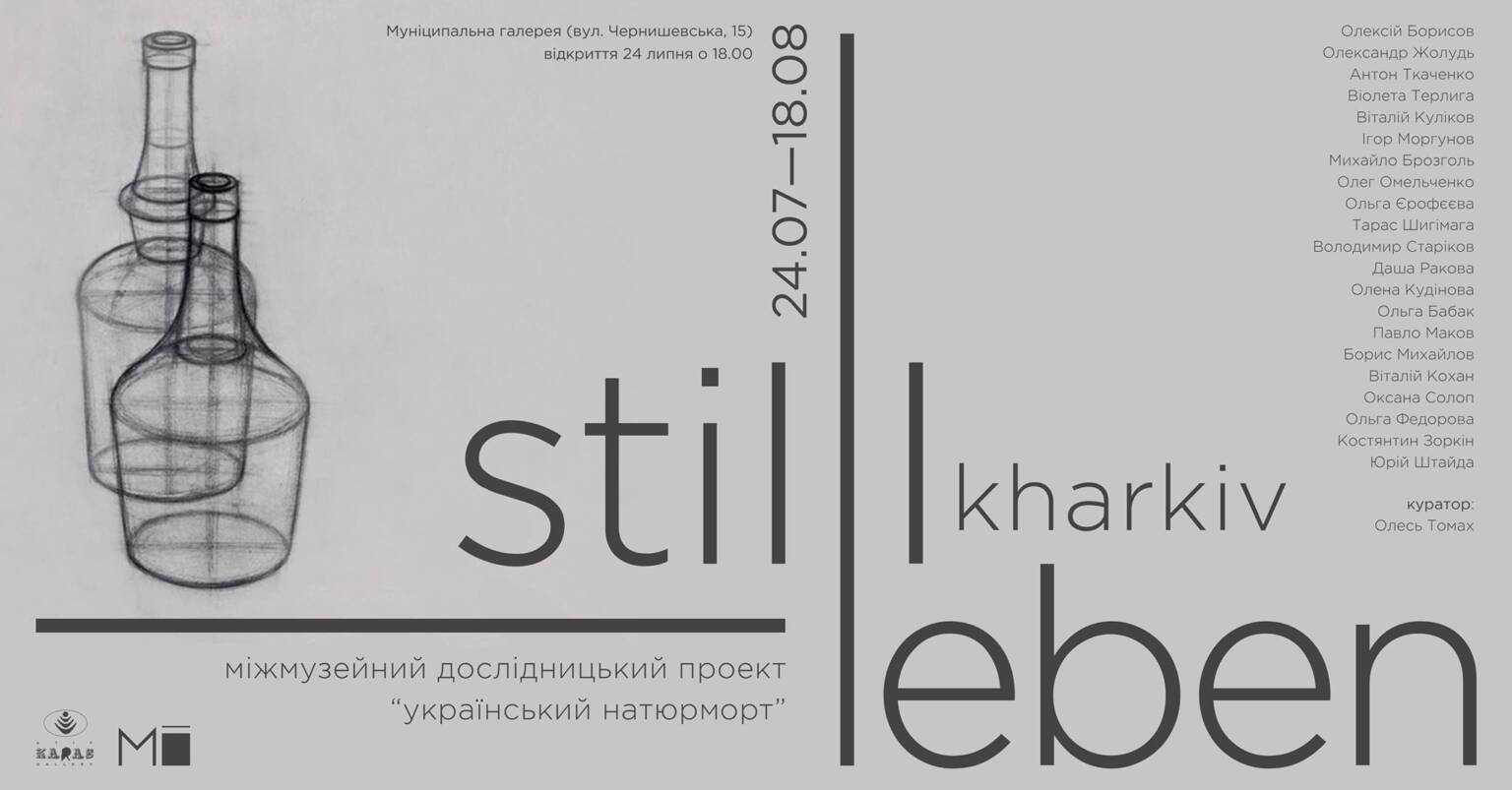 The intermuseum research project “Ukrainian Still Life”, which is on show in the exhibition space of the Municipal Gallery, presents the Kharkiv version of the still life genre development in contemporary fine arts and visual arts in Ukraine.

Understanding that there is no special “Kharkiv still life” (as opposed to the “Kharkiv landscape school”), the project curator has selected works by prominent, well-known, experimental artists, both seasoned and young (21 authors), in whose works still life appears as a platform of genre diversity and technical mastery. However, a special approach to this genre by Kharkiv artists can be felt — framing, geometry, spatial accentuation, focus of direct vision of an object, combination of linearity of form with picturesque ornamentation and decorativism. Along with traditional still life motifs — a cup, a glass, a flowerpot, some fruit, a shell, etc., the authors introduce into the real space of still life some symbols of the present and the modern material environment of man. Fantasy deliberately collides with reality, and then turns to the abstract forms of the chosen genre.

It is no coincidence that the title of the project includes the German equivalent of the Dutch term “stilleven”, which allows the viewer to focus on the essential qualities of the pictured object and the symbolic properties of the genre itself, whose experimental function only increases with time. The German word “Stillleben”, displayed on the project’s poster, is a signal of Europeanness and modernity in the artistic revelations of Kharkiv authors. Besides, this term indicates that from “nature morte” the subject of the image flows into a non-classical “nature vivante” — an anthem of the artist’s unbiased view of the world and humanity.

For the authors of the project related to Kyiv, still life is a kind of model of organization of painting, graphic, intermedia space, a school of visual experiment, within which the individual creative language of each artist is highlighted through this genre.

It is also important that the project combines in one exhibition area not only traditional techniques of arts and visuals (painting, graphics), but its most modern forms — photography, installation, video art, graphic visualization of the symbolic kind. The concept of the project requires a deliberate juxtaposition of works of classical and non-classical aesthetics, various formats and means of seeing the motif. Synthetic and analytical variants of the genre implementation of the subject hold fast to each other and do not shake the idea of Stillleben.

Still life is one of the types of conversation between an artist and nature. Kharkiv artists prove that it is also one of the most advanced mechanisms for developing a new understanding of visual space and plastic language, which produce the most recent understanding of the living form and the spirit of creativity.